The Art of Engraving: A Brief History

Just a short hop across the moors from our engraving studio workshop here in central Manchester lies the Peak District – Britain’s first National Park. Its northern reaches are known as the Dark Peak, a wild and rugged landscape of gritstone outcrops and boulders.

And it’s within this landscape, aided by a keen eye, that you may stumble across gritstone boulders decorated with mysterious carvings. Amazingly they were carved by our prehistoric ancestors and are some of Britain’s earliest examples of engraving. Dating from the Neolithic and Bronze Age periods, some are thought to be around 6,000 years old. 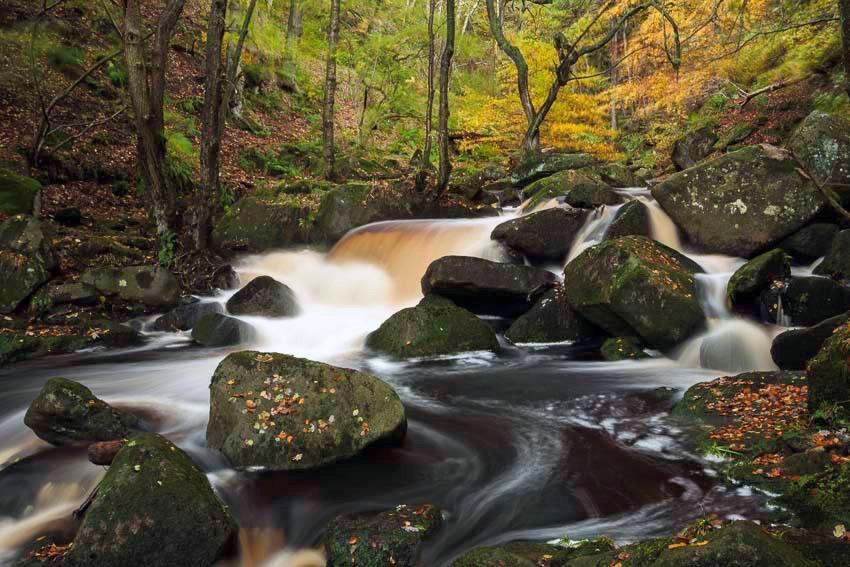 The waters of Burbage Brook flowing among large gritstone boulders within Padley Gorge on the edge of the Dark Peak within the Peak District National Park.

From Zigzags to Fertility Symbols

The carvings range from simple circular hollow ‘cups’ to more complex patterns such as zigzags, intertwining grooves, spirals and rings. What these patterns and symbols mean has long been lost through time, but theories abound. Fertility symbols, boundary or route markers and even hieroglyphic messages are all possibilities.

Many of the pieces we are asked to hand engrave, such as watches, glassware and jewellery, are treasured items that can be held and admired. But these ancient boulders cannot be moved, let alone carried in your hand. Which only adds to the mystery of why they were carved and what they mean.

The Peak District’s stone engravings may be several thousand years old. But they’re not the oldest examples of engraving in the world. That accolade goes to a fossilised shell that was engraved around half a million years ago.

The shell in question was found during an archaeological dig on the Indonesian island of Java at the end of the 19th-Century. As well as an ancient human skeleton, fossilised freshwater mussel shells were also unearthed. But it wasn’t until more than a century later – in 2014 – that archaeologist Stephen Munro took a much closer look at the shell collection. And to his amazement found that one had traces of engraving on it. His excitement increased further on realising that, at 500,000 years old, this was the earliest example of human engraving ever recorded.

It’s thought that something like a shark’s tooth was used to finely engrave a simple zigzag pattern into the palm-sized shell. Scientists also believe the mussel shell was fresh at the time the geometric pattern was carved on it. This meant that when the design was cut into the mussel’s dark outer shell, it revealed a brighter white layer beneath.

This perhaps shows that a white design set against black was as striking to early humans as it is to us today.

Mere youngsters compared to the Java Shell are several ostrich eggshells discovered in South Africa. Used as water containers and dating from around 60,000 BC, each is simply engraved with hatched banding. Decorative engravings from this period and later have also been found on bone and ivory.

By the first century AD, glass engraving was being practised. Often using an engraving wheel, decorative scenes and figures were cut into various glass objects. With many of the designs imitating those used in the engraving of semi-precious stones.

Fast-forward to the 14th-Century, and adding ornate engraved decoration to firearms had become well established. By the 15th-Century, Goldsmiths throughout Europe were creating increasingly detailed engraving designs for their jewellery and other items. They also began to print impressions of their intricate designs to record them. And from this, it’s thought, grew the art of engraving copper printing plates for producing artistic images on paper.

In the 16th-Century the Burin hand tool was first introduced and is still used today. Also known as a Graver, it’s made from hardened steel and used to engrave a design into metal or wood. ‘Burin’ is the same name given to the flint tool that our prehistoric ancestors used for much the same purpose.

Another tool still in use today is the pantograph engraver invented in 1603 by German physicist Christoph Scheiner. While its design and complexity may have changed considerably over the centuries, the principle of how it works remains the same.

The Industrial Revolution and Beyond

The 18th-Century saw the arrival of the Industrial Revolution. It brought with it a surge in the use of engraving within the printing industry. And was a period that changed the printing process forever. For what had once been done by hand could now be done by machine. The 1700s saw a transition from hand to mechanical stamping. And was quickly followed by steam-powered printing presses.

Change continued apace during the Victorian era. Steel replaced copper as a favoured engraving medium. Being a much harder metal, it was better suited to printing applications such as producing banknotes.

And as the 1800s merged into the 1900s, the engraving of sporting cups, trophies and shields became increasingly popular. And not just for National sporting achievements, but for lesser, more personal victories too. In fact, no matter what the event or achievement, if it was worth celebrating, then it could be commemorated with an inscription upon something. Be it on silver, pewter, glassware, wood or stone.

In the years immediately after the Second World War, pantograph engraving enjoyed a bit of a revival. While hand engraving, or push engraving as it’s known, faced a decline in its use. Although here at John Dearden Engravers, hand engraving is a craft and tradition that proudly lives on.

Engraving technology took a giant leap forward in the early 1960s with the development of lasers. In 1964, Bell Laboratories invented the CO2 Laser. The laser revolution had begun.

So, where does John Dearden Engraving fit into this long and rich history? Well, we’ve been crafting personalised inscriptions on beautiful objects since 1978. That’s over forty years of helping keep treasured thoughts, memories and achievements alive through the magic of words.

Hand engraving is our speciality – especially for watches, jewellery and glassware – and has been from the very beginning. In more recent years, state-of-the-art computerised engraving machines have become an integral part of the business too. Making the perfect accompaniment.

Engraving is one of the worlds oldest art forms and will continue to evolve. Just as it has since the time of the Java Shell. And yet, while innovations can only be beneficial, for us, it’s the decorative embellishments an engraver makes that matter most.